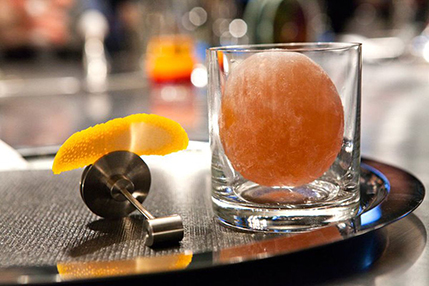 Bars have always been good at entertaining customers (think of flair bartending), but today creative cocktails can be found everywhere – even hospitals and nursing homes. So how can operators differentiate themselves from competitors and draw consumers out of their homes? This is a challenge now, at a time when delivery services and industry innovations are making it that much easier for people to just sit back and watch Netflix with a beer from the fridge, or even to host parties with on-demand cocktail delivery. So what is the answer? By putting on an Instagram-worthy show!

Operators everywhere are taking the cocktail bar to the next level by integrating unexpected experiential elements. With the rise of “eatertainment” concepts (emporiums that offer a mash-up between conventional dining and elements from entertainment venues like arcade games, bowling, theatrical performances and more) have come over-the-top, Instagram-worthy cocktails that encourage customers to get out and participate in and snap photos of unique, socially stimulating dining experiences. Think of the Denver-based Punch Bowl Social chain, which promotes socialization through its various games, like bowling and bocce ball, combined with craft beverages and shared plates.

While the term “eatertainment” is relatively new, the concept is not – Dave & Buster’s and Chuck E. Cheese’s were both early adopters of the concept, which has taken off recently in next-level formats. According to Datassential, 59 percent of consumers want to visit an eatertainment venue. Annika Stennson, Senior Manager of Research at the National Restaurant Association, told Restaurant Development and Design that younger consumers in particular find eatertainment concepts attractive because they value “social interactive activities when visiting restaurants.” Today, you will encounter concepts like the “barcade,” a combination of a nostalgia-inducing arcade featuring vintage games and a bar with aptly named drinks like the Ghost Eater (a cocktail that references PacMan and is made with ghost pepper-infused Tequila, served at the Bit Bar in Salem, Massachusetts). 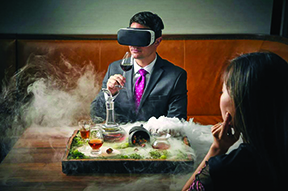 The guest at Baptiste & Bottle in Chicago has a full experience with The Macallan Rare Jouney cocktail, which includes taking in the scents of Sherry and Scotch while wearing a VR headset.

It’s not just about what’s inside the cocktail anymore (although that’s still important) – it’s about the experience of drinking it, too. Virtual reality (VR) technology, in particular, is helping operators establish full sensory experiences for customers. Post-apocalyptic-themed Mad Rex recently opened in Philadelphia, Pennsylvania and features a VIP area with a Virtual Reality Chamber where, according to Food & Wine, a “lab technician” will strap customers into a replica of an old-fashioned doctor’s chair and “hook them up to a fake IV that drips boozy drinks between their lips” as they watch a VR film or play a game like zombie-filled “Dead and Buried.” Even fine dining concepts are looking to eatertainment and modern technology to create memorable experiences for guests. This past summer, Baptiste & Bottle, located in the Conrad Chicago hotel, offered a $95 cocktail called The Macallan Rare Journey. As part of the drinking experience, visitors were asked to put on a VR headset that transported them to Macallan’s distillery while their drink was being prepared in the real world, producing scents of Sherry and Scotch to enhance the adventure. At the end of the VR journey, the drink was finally ready for consumption – and the obligatory social media post.

According to Eater, the “budding segment of social media marketing is disrupting the ways restaurants traditionally promote themselves.” Many operators are looking to create concepts that will go viral on social media outlets such as Instagram (it’s free marketing, after all), but what exactly makes a beverage Instagram-worthy? Color, or lack thereof, plays a large role, as do unique presentations and creative flavor mash-ups.

Named one of the Best Bars in America in 2015 by Liquor.com, Phoenix-based Bitter & Twisted Cocktail Parlour has a Book o’ Cocktails. Now in its fourth edition, the book has over 30 pages of unique cocktails and illustrations exemplifying pop culture. Leveraging color to make its mark on social media is the Taste the Rainbow cocktail. The drink consists of house-infused kaffir lime Gin added to Sloe Gin, with pineapple and strawberry, and is topped with an eye-pleasing composition of white foam with stripes of green, blue and maroon. But perhaps the most unexpected beverage available at Bitter & Twisted is the shareable Duck Bath Punch, which combines Amaro, Grand Poppy liqueur, pineapple syrup, lemon juice, Earl Grey tea, crushed ice and cucumber air bubbles, and as the name implies, is served in a miniature bathtub complete with rubber duckies.

Meanwhile, at California’s Black Rabbit Rose, it’s all about the mystery as the venue is home to a theater that hosts entertainers like magicians, illusionists and burlesque. Echoing the mystery surrounding the nightlife lounge, cocktails like the Dark Arts are given jet-black coloring (achieved by using on-trend activated charcoal) that’s offset by a pure white flower. 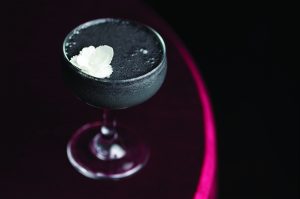 The Dark Arts cocktail, from Black Rabbit Rose in California, is made with lemongrass Vodka, lime, aloe and activated charcoal. Courtesy of BlackRabbitRose.com

But that’s not the only cocktail that references magic. The Mood Ring cocktail served for a limited time at Mission Chinese Food in New York was called “a tableside magic show” by Bon Appetit, taking inspiration from the color-changing piece of jewelry you might have had as a child. The cocktail became an Instagram-able show for customers, with blue butterfly pea flower tea as the star ingredient in a glass of ice on an LED coaster, which made the cocktail appear to glow. To the surprise of guests, once Caña Brava coconut butter-washed Rum, Combier orange curacao, and pineapple and lime juices were mixed with the butterfly pea flower tea, the acid caused the tea to change from blue to magenta, just like a mood ring. Although the Mood Ring cocktail is no longer available at Mission Chinese Food, the beverage director, Sam Anderson, told PUNCH that he still looks to create cocktails that uniquely inspire “a kind of sensory disorientation.”

Familiar cocktails can also get an eatertainment makeover to achieve an Instagram-worthy status. Take the well-known Bloody Mary, which over the past four years has grown 39 percent on menus, according to Datassential’s MenuTrends. Today, many operators including Hubert Keller’s restaurant Fleur in Las Vegas are offering customers the experience of building their own Bloody Mary garnishes tableside. Creating cocktails tableside is an older concept that’s coming back in vogue with creative spins like Chicago-based The Gwen hotel’s Prohibition Porter Experience, which is a traveling cocktail cart that arrives with its own bartender, allowing guests to request room service to create four drinks of their choice. In addition, a number of restaurants including T-Rex at Disney and Carnivale Chicago are featuring a spin on traditional martinis with the cotton candy martini. At these venues, guests get to watch colorful cotton candy fluff gradually disappear as alcohol is poured over it, leaving them with a sugary beverage that evokes the nostalgia of fairs and festivals. 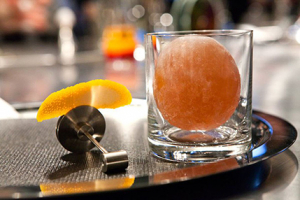 In the Rocks cocktail, from The Aviary in New York, features a hollowed-out sphere of ice filled with a Szechuan-accented Scotch and Bourbon that customers crack open tableside, using a slingshot device placed over the beverage.

Even the ice going into cocktails is getting an eatertainment spin put on it. The New York location of Grant Achatz’ concept The Aviary, which Business Insider featured on its list of “50 Best Bars in the World” last year, is thinking outside the cube. They are “redefining what mixology and bartending can be,” Business Insider reports, with their cocktail In the Rocks, which features a hollowed-out sphere of ice, filled with a Szechuan-accented Scotch and Bourbon, that customers crack open tableside using a slingshot device placed over the beverage.

As image-driven social media sites continue to emerge and grow, and as delivery and meal kit services proliferate, expect Instagram-worthy and experiential concepts to also increase throughout the industry, as operators look for creative ways to get consumers out of the house and into their restaurants.

This article has been provided by Jaclyn Marks, Publications Specialist at Datassential, a leading consulting firm and supplier of trends analysis and concept testing for the food industry. 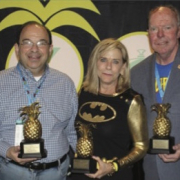 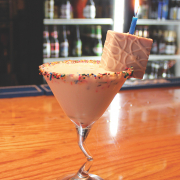 Party On With Dessert Cocktails 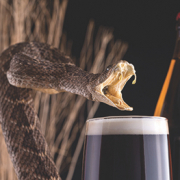 Deep Into Cider-Space: Exploring a Whole Universe of Beverages