Party on with Dessert Cocktails

With this fall marking the 30th anniversary of in the Mix, we’re in the mood to celebrate – and what’s a more fitting way to celebrate than with a toast? But rather than traditional glasses of Champagne, we’ve got something a little sweeter in mind: dessert cocktails. To be clear, we’re not talking about dessert wines here, although those may be used in some dessert cocktails, too. Rather, we’re homing in on alcoholic beverages featuring flavors and ingredients typically found in actual desserts (think cakes, pies, puddings and more) as well as actual desserts that are infused with alcohol for a boozy after-dinner treat. With holiday season fast approaching, it can pay for operators and mixologists to plan ahead and consider ways they can leverage their alcoholic beverage offerings to take full advantage of the festive atmosphere.

Put more than just a cherry on top

By now, just about everyone has heard of freakshakes – the viral, highly-Instagrammable, over-the-top milkshakes that come adorned with seemingly every sweet thing under the sun. Freakshakes embody the intersection of food and drink, something that could be, and in some ways already is, mirrored on alcoholic beverage menus. Consider the trend of over-the-top Bloody Marys that sport practically an entire meal’s worth of garnishes. The same concept could be applied to dessert cocktails and, in fact, some operators are already taking the freakshake concept and adding a boozy twist. Holsteins Shakes and Buns in Las Vegas, for instance, offers a line of Bam-Boozled Shakes that are essentially alcohol-infused freakshakes. The Black Hole Shake, a customer favorite, features Patrón XO Cafe and is topped with black coffee chocolate cake, chocolate sauce, Oreo candy canes, sugar footballs, vanilla frosting and sprinkles. There’s even a vegan option called the Vegas Vegan (Stoli Strasberi Vodka, vegan ice cream, pretzels, banana, peanut butter, raspberry sauce, raspberry candy stick, vegan brownie bites and banana Laffy Taffy) for those who are following a plant-based diet but still want something fun and indulgent. While mixologists in general may not usually have to worry about customers following plant-based diets, remember that many dessert cocktails rely on products like cream for flavor or texture. The majority of consumers (86 percent, in fact) are interested in pursuing dairy-free diets according to Datassential’s 2019 New Healthy Keynote Report, so it may be worth keeping that in mind and offering a dessert cocktail option that’s totally dairy-free or vegan, as Holsteins does. 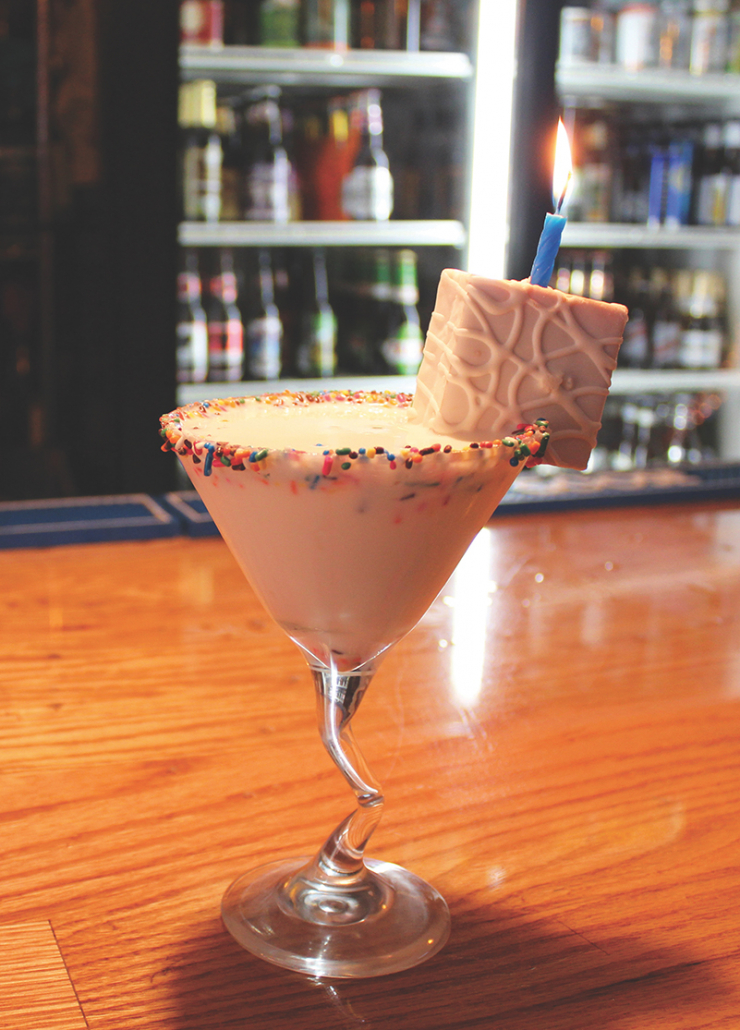 Birthday Cake Martini by Jen’s and Friends in Savannah, Georgia

Not every drink has to come with an entire candy store’s worth of garnishes to be considered a dessert cocktail, though. In the case of operators who just offer regular milkshakes, simply adding the option to “make it boozy” can play to the trend. And in contrast to over-the-top freakshake-like creations, some alcoholic beverage establishments are offering slightly more scaled back options. Jen’s and Friends in Savannah, Georgia for example, offers a Birthday Cake Martini that comes garnished with a cube of birthday cake and a lit candle for extra pizzazz. Other unorthodox cocktail toppers that can be found at Jen’s include Rice Krispies Treats, Pixy Stix and half a Reese’s Klondike Bar, all ingredients that lean into the dessert cocktail trend while also capitalizing on consumers’ nostalgia for the foods of their childhood. According to Datassential’s Dessert’s Sweet Spot Keynote Report, nostalgic dessert flavors like Rice Krispies Treat and cookie dough are trending; as a result, mixologists looking to incorporate desserts into their creations can leverage those items as garnishes to add a familiar yet refreshing twist to cocktails. 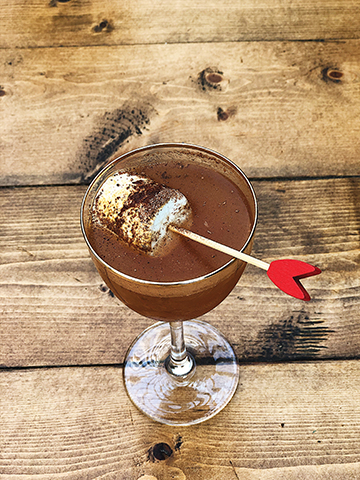 I Want S’mores! cocktail by Haberdish in Charlotte, North Carolina.

Of course, not all drinks have to come with actual pieces of cake or pastries to be considered dessert cocktails. Leveraging flavors that call to mind classic desserts can work just as well, and there are a number of syrups, spirits and bitters available today to help mixologists achieve just that. Take RumChata, for example – its flavoring of cinnamon and vanilla can be leveraged to form the base for cocktails designed to taste like, say, cakes or cookies. In fact, Bally’s Wild Wild West in Atlantic City, New Jersey, has in the past offered a Girl Scout cookie-inspired shot called the Saloon Samoa that combines Amaretto, RumChata and chocolate syrup, with a shredded coconut rim. Similarly, chocolate bitters can also be used to add notes of cacao, while fruit liqueurs or shrubs provide an aromatic, slightly sweet punch.

Take inspiration from operators who are finding creative ways to reinvent desserts in cocktail form, like Haberdish in Charlotte, North Carolina. The restaurant’s I Want S’mores! cocktail stars graham cracker-infused Maker’s Mark, marshmallow root, cocoa nib gomme syrup (essentially simple syrup with gum Arabic added for a silkier texture), dark chocolate-washed Angostura bitters and a cocoa powder toasted marshmallow topping. As Haberdish demonstrates, infusing spirits with dessert-related ingredients can be an effective way to introduce those flavors into a drink. In a similar vein, for the month of August, New York-based Butter and Scotch released a cocktail menu based around HI-CHEW, a chewy Asian candy that comes in flavors such as grape, strawberry or green apple. Butter and Scotch’s menu will feature beverages made with HI-CHEW-infused liquors. The Acai Cobbler, for instance, will feature acai-infused lime juice, coconut milk, cream and Sherry. 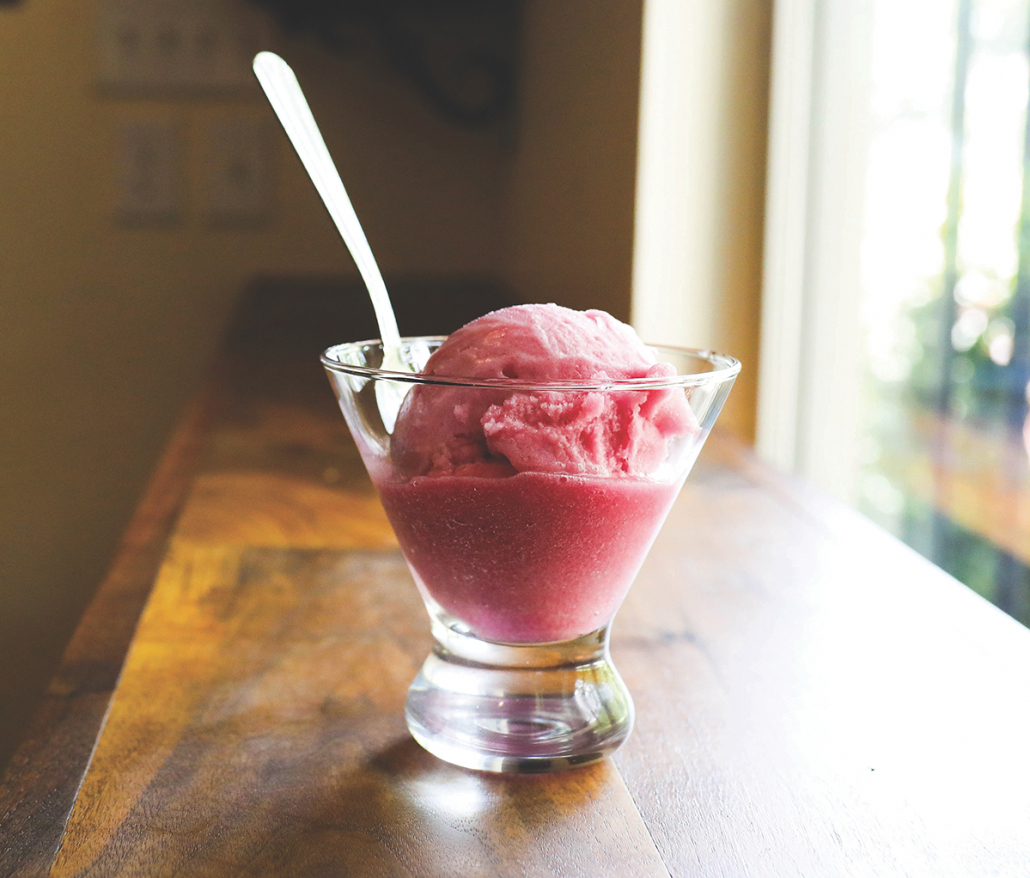 Mix ice cream and alcohol for a cool combo

While the dog days of summer are largely behind us, ice cream still has its place on the menu and in alcoholic beverages, too. Consider sgroppino, for example, which is a traditional Italian cocktail made by combining chilled Prosecco, Vodka and lemon sorbet. At Osteria Morini in Washington, D.C., sgroppino is available in seasonal fruit-flavored variations, from Morello cherry to lemon to strawberry lavender. Other operators are playing off the frozen cocktail trend by turning the drink itself into an icy treat. The Rosé Slushie at Walnut Street Café in Philadelphia is essentially a cocktail of Rosé, hibiscus tea and St–Germain that’s been transformed into a sippable or scoopable slushie. In some cases, leveraging frozen desserts in alcoholic beverages can be as simple as topping a cocktail with a popsicle or adding a scoop of ice cream to make an alcoholic ice cream float. New York’s Loopy Doopy Rooftop Bar, located on the roof of the Conrad Hotel, plops a boozy ice pop (in flavors like Raspberry Lime Paloma or Mango Mai Tai) into a base of either Rosécco or Prosecco. Similarly, at Disneyland’s California Adventure Park, adults can enjoy a Hard Float – an ice cream bar served in either hard soda, hard root beer or dark beer.

A number of operators are also making ice cream with alcohol as an ingredient. Austin-based Prohibition Creamery is a pro when it comes to offering spiked frozen treats, with ice cream flavors ranging from Prickly Pear Mezcal (starring El Silencio Espadín Mezcal) to Signature Bourbon to Whiskey Chocolate. Even trendy Thai rolled ice cream, which is loved by over 60 percent of consumers who have tried it (Datassential FLAVOR), is getting a boozy twist. An outpost of Luigi’s Ice Cream in Jersey City menus rolled ice creams in flavors like Tequila Rose Strawberry Shortcake (fresh strawberries, Tequila Rose, Nilla Wafers and whipped cream) as well as typical scoops starring Japanese Whiskies and Sakes (like yuzu or apple pie flavors).

Celebrate with something sweet

When it comes to alcoholic beverage innovation, look to blur the lines between food and drink. Not only could dessert cocktails potentially encourage customers to reach for one last after-dinner beverage, but they could also be a more appealing option to those who may not necessarily have room left for dessert, but still want something sweet to celebrate at the end of the meal. And although we’ve mostly covered the use of dessert flavors in cocktails, the crossover between the two can really go both ways. Just as cocktails that star familiar dessert flavors can bring something unexpected to the table, so too can spiking classic desserts – think infused cakes, puddings or pies, or even simply adding a splash of Vodka or Rum to caramel or chocolate sauces. Regardless of how operators choose to go about melding desserts and cocktails, alcoholic sweet treats can create unique and memorable experiences for those looking for something a little more celebratory.